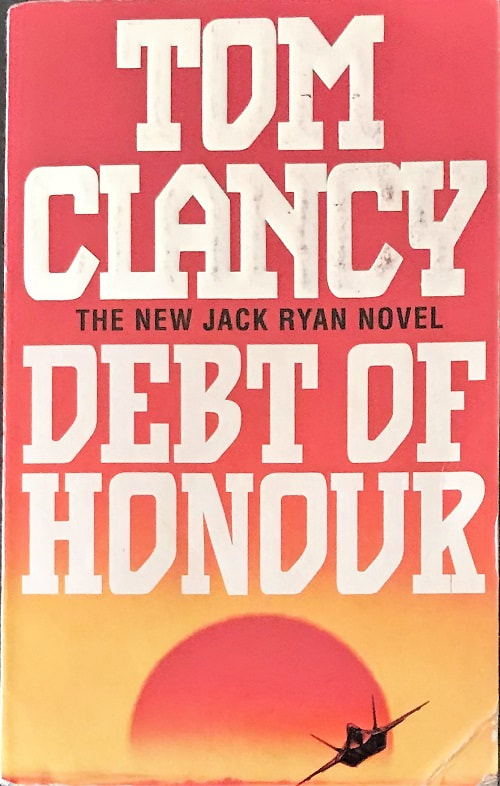 The New Jack Ryan novel. Tom Clancy's spectacular new novel, his most gripping and timely work yet and has been a record-breaking No. 1 bestseller around the world. Filled with the exceptional realism, intricate plotting and knife-edge suspense that are Clancy's hallmarks, Debt of Honour plunges his hero Jack Ryan into a thrilling new adventure.

On the Pacific Island of Saipan, a wealthy Japanese businessman regards his new-bought land with satisfaction. In the Indian Ocean off Sri Lanka, a foreign navy begins a series of highly unsusual exercises. At the headquarters of America's major stock-clearing corporation an engineer brings a customized computer program on-line for the first time and smiles at his own private joke. Three seemingly unrelated incidents but all just the first links in a chain of events that will stun the world.

Called out of retirement to serve as the new President's National Security Advisor, Jack Ryan quickly realizes that the problems of peace are fully as complex as those of war. Enemies have become friends, friends enemies and even the form of conflict has changed. When one of those new enemies readies a strike not only at America's territory but at the heart of her economy, it is Ryan who must somehow prepare an untested President to meet the challenge. For there is a debt of honour to be paid and the price will be terrfyingly high.

Condition : Good condition but last few pages if not careful are ready to be detached from the internal rim of the book. No writings or page foldings on the book.